The Banana Slugs of UC Santa Cruz visited San Marcos on Saturday to play the final contest of the Cougars’ three-game home stand. Coming off a win last weekend against Saint Mary’s, San Marcos rode a wave of momentum into a big game against another strong WCLL opponent.

Midfielder Ian Hooks (Sr) got the scoring kicked off early in the 1st with an isolation drive from the restraining line. The Banana Slugs answered quickly however, and kept the game close throughout the opening quarter. The game broke open in the 2nd, when the Banana Slugs were penalized for an illegal stick. The Cougars took advantage, scoring 3 unanswered goals on man-up and taking a 9-5 lead into halftime.

San Marcos came out flat in the 3rd quarter, allowing five goals to Santa Cruz while only scoring one. A 10-10 score at the start of the fourth set the stage for a fantastic finish. 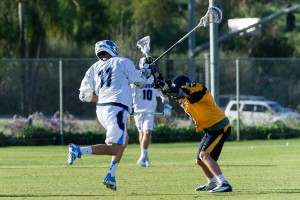 The Slugs took an 11-10 lead with a goal early in the 4th, and maintained that lead into the late stages of the game. The Cougars found themselves man-down with four minutes to go when Santa Cruz scored an insurance goal, seemingly putting the game away up by two with just over three minutes to play. Following a defensive stand as the clock passed the 2:30 mark, senior LSM James Delaney picked up a groundball and charged down the field in transition. Knowing he had attackmen to back up the shot, Delaney fired from just inside the restraining box and scored on a beautiful bouncer to the top-shelf.

With momentum they hadn’t seen since the 2nd, the Cougars looked again to freshman midfielder Iain Holman to make a play. Taking the face-off with 2:14 to go, Holman won the ball and took it to the cage himself, scoring from the doorstep and tying the game up with 1:57 to go in regulation.

The Banana Slugs made a big mental mistake moments after the Cougars tied the game, committing a delay of game penalty and giving San Marcos a 30-second man advantage with 1:47 left. The Cougars took advantage again, as attackman Cade Vlacos (Fr) scored the game-winning goal on a drive from behind the cage with 1:21 remaining. 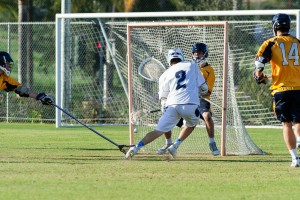 “It was a total team effort. We dug ourselves a bit of a hole, but I think everyone felt like we were going to pull it out. We got it together just in time and everyone did their part.” Midfielder Iain Holman stated after the game. San Marcos will take to the road this weekend, as they travel to Los Angeles to face Occidental (2-1) on Saturday, February 21st.