The Cougars played host to the Gaels of Saint Mary’s on Sunday afternoon, a rematch of last season’s tight contest which saw the Gaels come out victorious, 18-17. San Marcos was determined to make a statement in this important non-conference match up, and they made one in the form of a resounding, 17-12 win.

Saint Mary’s started the day off jumping in front with a quick goal, but the Cougars responded promptly. Scoring four goals in the first quarter, the San Marcos offense looked to continue where it left off after last week’s 19 goal performance against Long Beach. The Gaels were poised and ready to answer however, as they held the Cougars to just two tallies in the second quarter, taking a 6-6 tie into halftime. 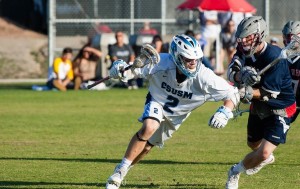 San Marcos came out firing to start the second half, scoring 6 in the third quarter and taking a 12-8 lead into the fourth. The output was sparked by outstanding efforts from midfielders Iain Holman (Fr) and Austin Halligan (Fr), who dominated play at the face-off “x” and provided consistent scoring opportunities for the San Marcos offense. “We were stoked to see the team come out of the break and bounce back after a rough second quarter. Being able to suppress our opponent’s momentum and bounce back was something we struggled to do consistently last year, and we are looking to make it more of a trend this season. Iain and Austin were real difference makers for us; they out-hustled everyone on the field and came up with some huge plays.” Coach Hicks said on Sunday evening, speaking about his team’s resiliency and effort.

The Cougars will take on another WCLL squad, the UC Santa Cruz Banana Slugs, on Saturday, February 14th. The Slugs will be playing their first game of the 2015 season, coming off a 4-10 (3-3) campaign in 2014.