After their first trip to the playoffs last season, the Cougars are poised and ready to make noise in the SLC again this year. With a talent-laden roster including a 12-man freshman class and 4 returning seniors, San Marcos looks to improve on the 2014 one-and-done postseason and make a run at the SLC DII championship.

San Marcos started off the day with their foot on the gas, and did not let off all afternoon. A revamped attack line featuring returning standout Austin Jenkin (Fallbrook HS) dominated the 49ers defense. Jenkin and freshman Clade Vlacos (Foothill HS) led in scoring with 7 points each, followed by Adnen Swilley (San Marcos HS) who added on 5 tallies to the young group’s total. 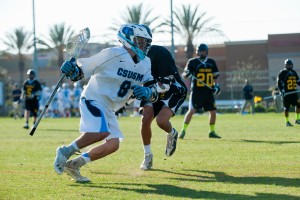 “We have invested a lot of time in previous off-seasons recruiting the right guys in order to keep building this program. With the output we saw from them today, we’re only just beginning to see the dividends. I’m really excited about this season and the future of this program.” Coach Hicks said after the game on Saturday, when asked about his impressive freshman class.

It wasn’t all about the new weapons Coach Hicks has in his arsenal on Saturday. Senior LSM James Delaney (Mt. Carmel) looks to continue in his 4th and final season as an impact player in all facets of the game. Whether scooping up ground balls after face offs or creating turnovers and fast break opportunities, Delaney was all over the field on Saturday.

The Cougars continue their three-game home stand on Sunday, February 8th against Saint Marys of the WCLL. The two teams met last season in a tight game that saw the Gaels come out victorious, 18-17.