San Marcos traveled to Los Angeles on Saturday to take on the Occidental Tigers (2-2) in a rematch of last season’s 17-10 Cougar victory. Saturday’s contest turned out to be a much closer game, as the teams with back and forth for four quarters, with neither team scoring more than two goals unanswered until the final minutes of the contest 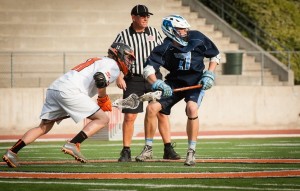 The Cougars went into halftime with a 5-4 lead on the back of big efforts from attackmen Austin Jenkin (So) and Adnan Swilley (Fr), who worked in tandem to have a hand in four of the Cougars’ five first-half tallies. The second half did not prove any more effective in identifying a superior team, as the teams went blow for blow until a 9-9 tie was broken late in the 4th. 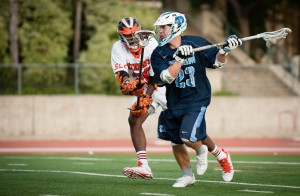 Austin Jenkin answered the Tigers’ tying goal immediately, with an outstanding individual effort to give the Cougars a late advantage. San Marcos scored two more unanswered goals to take a 12-9 lead, and held on to win the game 12-10. The Cougars will play their 2nd divisional game of the season when they take on the UC Irvine Anteaters (1-4) at Fallbrook High School on Sunday, March 1st.