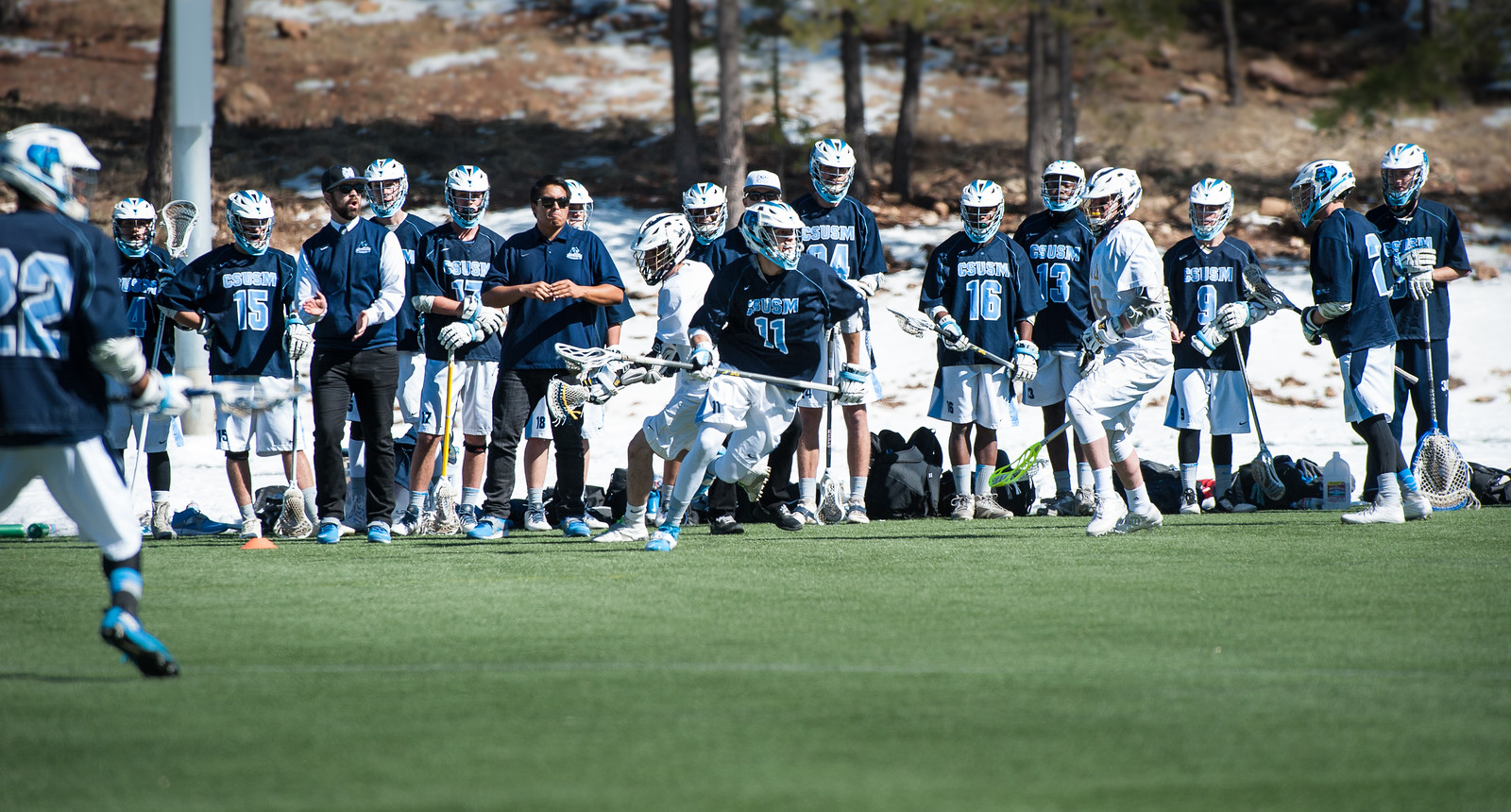 The Cougars traveled to Flagstaff, AZ on Friday for a round robin-style weekend against Northern Arizona University and #21 Fort Lewis College.  Following # 13 Cal State Fullerton’s 14-7 win over #21 Fort Lewis, San Marcos took on the Lumberjacks in a rematch of last season’s first-round SLC playoff match-up which saw NAU come out victorious, 13-10. 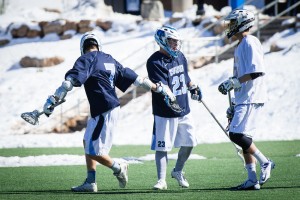 With remnant snowfall covering portions of the field, the Cougars played what was their most complete and balanced game of the season thus far, winning the rematch 12-8.  Attackmen Cade Vlacos and Austin Jenkin again stole the show on the offensive side of the ball, scoring 8 of the team’s 12 goals. Vlacos attrbutes his success to the offensive unit working in concert, “The off-ball timing was there for us today. It has taken us a few games to get to this point, but we really gelled as a unit. Everyone was working at full-speed and taking advantage of the opportunities as they came.” San Marcos took a 6-3 lead into halftime and remained in the driver’s seat for the duration of the afternoon, building to as much as a 6-goal lead in the 4th quarter.  “We were patient with the ball, we didn’t force looks and took advantage when they came. Our effort on the ride and time of possession wore down at their defense all afternoon  and created a lot of chances in the second half.” Vlacos finished with a game-high 8 points on 5 goals and 3 assists. 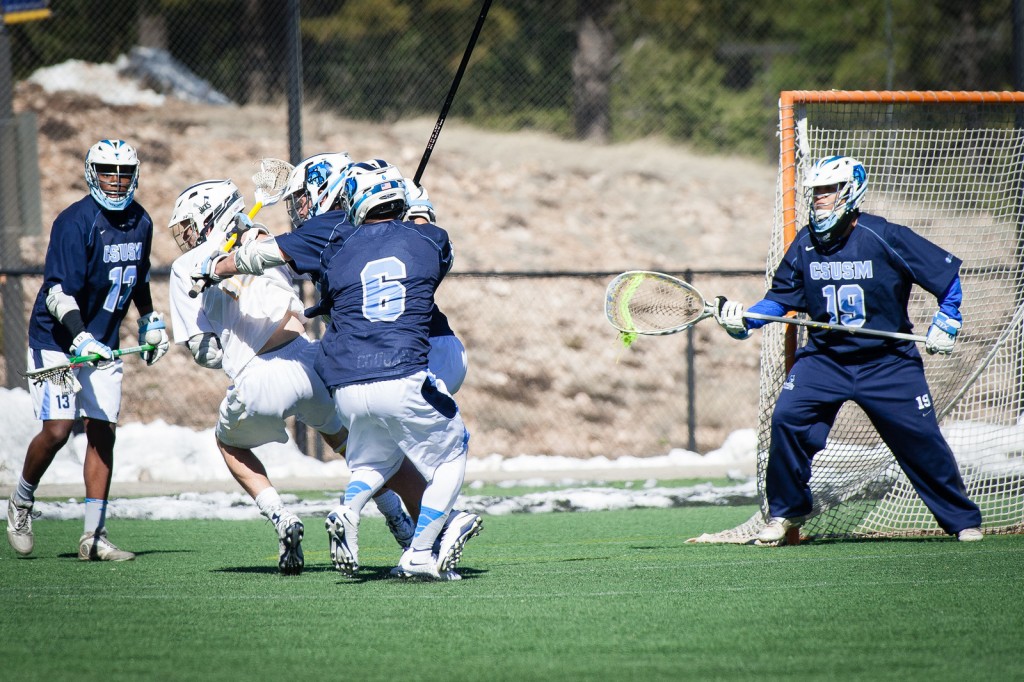 Not to be outdone, the Cougars’ defense really demonstrated their ability to play shut-down lacrosse in settled situations, holding the Lumberjacks 5 goals under their average of 13.5 goals per game. Consistently assigned to the opponent’s standout attackman, senior defenseman Jesus Rojas led his defense in shutting down a dangerous Lumberjacks’ offense. When asked what has made the defense successful, Rojas said, “We haven’t done anything special. We’re playing solid as a unit because individually everyone is doing what is expected of them to make us successful. Our communication is getting better, and we’ve been improving on our slides and recoveries all season.”

San Marcos faced off against #21 Fort Lewis in the early game on Sunday morning. With each team playing their second game in as many days, the squad from Durango, CO seemed to be better acclimated to the elevation than the Cougars. When asked what impact the unusual elevation had on his team, Coach Hicks said, “We were definitely taking account for it as coaches. Substitutions needed to be quick and more frequent than we’re used to, but we have been doing heavy conditioning work since fall so we knew we would be able to play at a high level. The boys came out and played hard, they were not going to make any excuses.” Freshman midfielder Iain Holman was a standout at the face-off “X”, winning possession for the Cougars on 20 of 25 contests and scooping up an astonishing 17 ground balls. Holman has stepped up in a huge way following a season-ending injury to freshman face-off specialist Austin Halligan, taking the vast majority of the team’s face-offs. 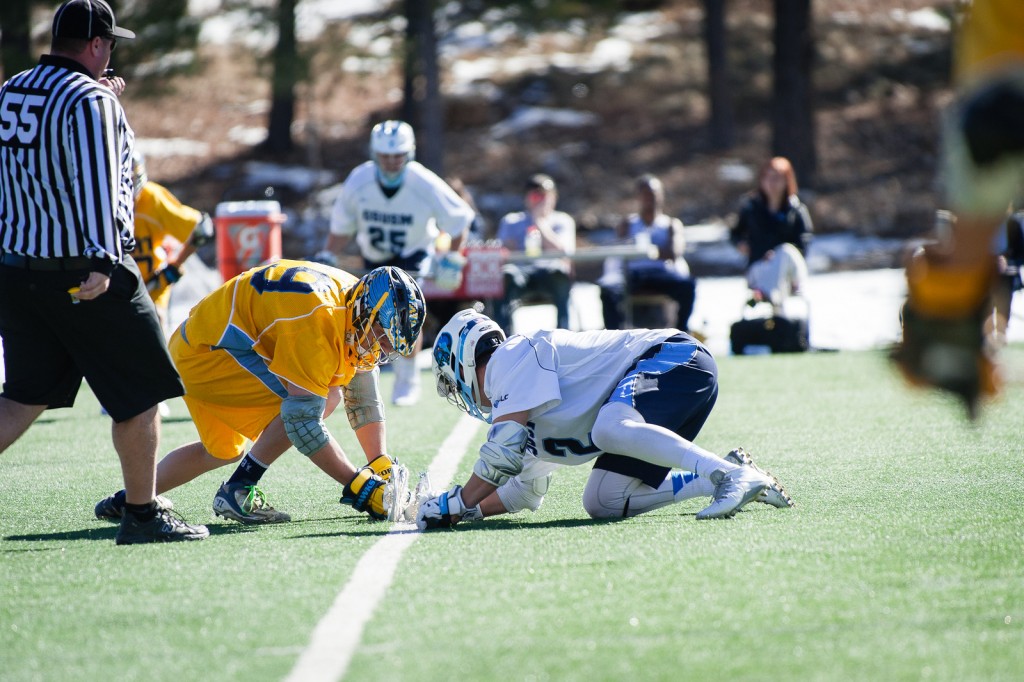 The Cougars took a 6-5 lead into halftime in what was a tightly contested, lead-swapping first half. Fort Lewis came out hot in the 3rd quarter, scoring 2 quick goals to take a 7-6 lead. San Marcos responded in a big way, finishing the 3rd quarter on a 4-1 run and taking a 10-8 lead into the 4th. The two teams traded scores in the 4th and Cougars held on to win, 13-11. After the game Coach Hicks expressed his great pleasure with the way his team played over the weekend and during the course of the first month of the season, “We had a solid game plan coming into each match-up and the guys executed very well. We have won a few close games so far this season, I think that will help us down the road once we get closer to the playoffs. The games are just going to get tougher and tougher, there is still a lot of lacrosse left and much for us to improve.”