Cal State San Marcos hosted the UC Irvine Anteaters (1-6) on Sunday in their second divisional game of the season. The Cougars now lead the all-time series between the two teams 3 games to 1 after defeating the Anteaters handily, 18-8. 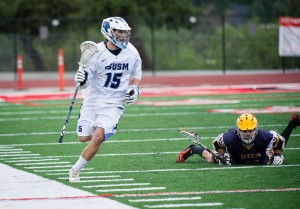 San Marcos began the rainy Sunday afternoon with an offensive charge. Freshman attackman Adnan Swilley got the scoring kicked off with a goal on the Cougars’ first possession, followed by a helper to midfielder Chance Stahura (Jr) on the next.  Irvine stayed in the game for the first half, scoring five while keeping San Marcos to just one goal in the the second quarter, making the score 7-5 at halftime.

The Cougars came out strong in the second half, as senior Jesus Rojas and the rest of the defensive unit stifled the Anteaters offense, creating multiple chances for the Cougars to capitalize. Attackman Austin Jenkin (who was named SLC player of the week for last weekend’s performance against Occidental) took advantage of the opportunities, scoring 4 of his 5 goals in the second half.

San Marcos travels to Flagstaff, AZ this weekend to take on the Northern Arizona University Lumberjacks and Fort Lewis Skyhawks of the RMLC. NAU knocked the Cougars out in the first round of the SLC playoffs last season in a snowy contest that ended 13-10.