In a hard fought game this past Sunday, the Cougars were given their first loss of the season.  With many missed opportunities and the game coming down to the final minutes, the San Jose State Spartans came away with an 8-7 victory.  CSUSM had 21 unforced turnovers and and the Spartans capitalized on many of their transition opportunities.

The game started with a quick goal from San Jose State and the Cougars never regained the lead for the rest of the game.  CSUSM was able to tie the score twice and with the game knotted at 7-7 in the final minutes, the Cougars were unable to execute. 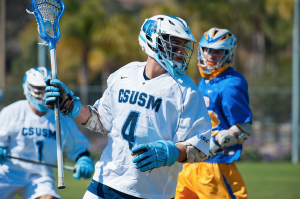 On the offensive end, Junior Attackman and Captain, Dylan Perry (on left), had four goals and one assist.  Current points leader, Austin Jenkin, was shutout for most of the game and only had one goal against the Spartan defense.  The midfield unit had trouble finding the back of the net, and with so many turnovers you can be sure that the Cougars are watching last Sunday’s film and practicing hard this week to prepare for a tough game this weekend against Occidental this weekend.

Coach Hicks had little to say after the game except that “21 unforced turnovers is absurd and the guys know that.  This week we will be correcting all of our mistakes on offense and pushing hard to tighten up our play in transition.  Defense is still playing well and we need to continue to do so if we expect to beat a solid Occidental team this weekend.”

The Cougars face the Occidental Tigers this weekend on Saturday, March 1, at 6:00pm.  The game will be at Great Oak High School in Temecula, CA following the high school varsity lacrosse game.  The Cougars have not faced Occidental in an official MCLA  match up.